‘Tis a sad day at the Rodney thong-camp for his four Windows 7 PC’s going down. 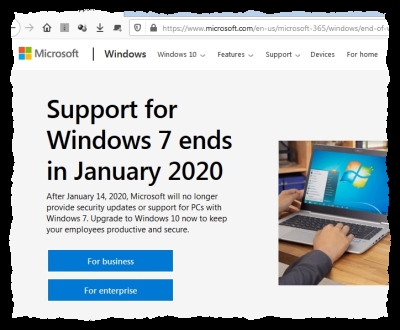 Down, down, down deeper there, to where all obsolete binary code goes. Down there with GM-NAA I/O and Windows 3.1.

Ow well, today’s the last day UPDATES for Win7 are avalaible, and hold-out dummies will flock to Windows 10.

Others will frantically get the latest-last Win7 updates today then backup (I like Macrium Free) in case they have to reinstall W7 in the future.

Up until about 24 months ago I was still using Windows XP and swore I’d never use Win 7 …. but Firefox browser updates for XP sucked … and other software bits and twangs were starting to cause trouble … so bent over and copped Windows 7.

Now days I’m on 7, and loving it, and swearing I’ll never go to Windows 10. (each new version is the ‘new world orders’ updated wet dream)

I installed 10 on two family members laptops in December and had a bit of a play afterwards.

Both those older shitty Acer laptops actually boot faster now and cost nothing for W10 key using the W7 key. (only $5 on eBay anyway)

But #uck that, I’ll stay with 7 a bit longer

Plan B: Spare 16gb micro SD card with USB adapter and installed FREE Kubuntu Linux on it to see what it is like.

(Think of Linux as like Ford, and Kubuntu a ‘make’ of Ford)

Only needs 8GB or more to install. Crazy how well it runs off a SD card. No anti-virus software need bogging it down, as it’s secure and hackers usally leave it alone and go for their pet peeve, Windows.

It’ll fly when I transfer it all onto a SSD drive.

Bank of China, Google, Android phones and tons of others use Linux

I’ve tried other ‘models’ like Mint ect, but keep coming back to this as it’s file directory look is Windows user friendly.

It’s FREE and looks and feels like Windows 10 but has nothing to do with that “innovating to zero” POS, Bill Gates.

Reduce world population by 15%? Innovating to “zero” what? Zero humans?

Vaccines are supposed to keep people alive and healthy!

What do healthy alive people (thanks Billy) do when they’re bored?

They #uck and get pregnant INCREASING population!

Go on, keep using that demon’s rubbish then.