Hitler wrote an evil manifesto about ridding Germany of 523,000 Jews.

Yet when some other ass hole in 1980 chisels 7.3 billion less humans into stone, no one cares on it’s 40th birthday?

Imagine you’re a cop sitting at the station on a quite night, and you get a 911 (AU 000) call to go catch folks doing graffiti on a monument that …

I’d hang up and carry on eating my doughnuts with coffee. Maybe call a mate with a bulldozer to go finish the job off.

Yet cops in the state of Georgia, United States, have set up CCTV to protect that site from ‘vandalism’. 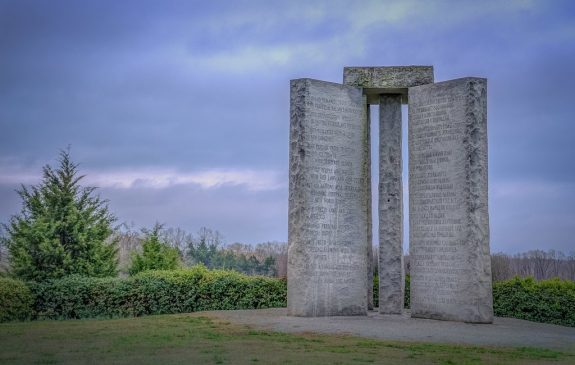 The site is called the ‘Georgia Guidestones’, and it’s owner, whom ever, wrote his or her 10 Commandments on it in 1980, 40 years ago.

Maintain humanity under 500,000,000 in perpetual balance with nature.

“The world today has 6.8 billion people. That’s heading up to about nine billion. Now if we do a really great job on new vaccines, health care & reproductive health services, we could LOWER that by perhaps 10 or 15 percent.” Bill Gates Feb 27, 2010 TED talk “Innovating to ZERO”

7.8 billion less 15% is how much? He has three (3) spawn. Yet he and his ilk regard that as excessive when others have the same or more children. The TED crowd, full of Billy’s ‘chosen’ tribe clapped ecstatically anyway. 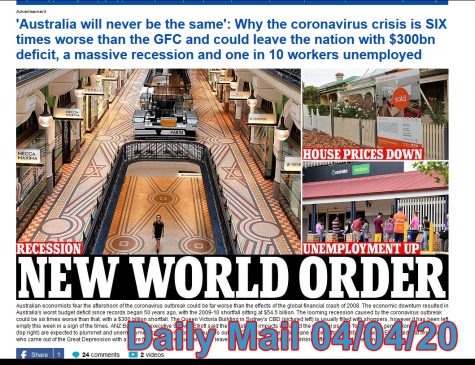 Look at the cheeky DM bragging about something they used to scoff about! New world order? Look at what the supposed Illuminati elite have been SUPPOSEDLY wanting for decades. no cash, one world communist government based on Marx’s 10 planks, no private property, the right for the state to enter our homes for no reason, implantable microchips (Bill Gates “ID2020” and his medical “QUANTUM-DOT TATTOOS”) … and 500 max million global human population (‘Georgia Guidelines’ cops defend while saying they don’t know who owns them) and on and on. Turnip King

Gordon Brown yesterday calling for a one world government, now the DM posting “NEW WORLD ORDER” in all caps with that shopping centre floor showing 6 pointed stars and kabbalah like designs. What are you trying to tell us, DM? Are you wearing tin foil hats now?

It’s odd that the above pattern is the same as the floor pattern the Daily Mail used to announce the “NEW WORLD ORDER”.

Top of the Kabbalah ‘tree of life’ is the “Crown”. Corona in Spanish means “crown” too.

The full photo shows a clock on 3 o’clock (hands make an upside down Christian Cross?) and a ‘Polo’ (some pagan god?) advert with a human, and what appears like, although very abstract, horns off it’s head like Baphomet, the ‘god’ witches are into. Yes tall stretch, but why use that loaded photo with “Stars of David” and Kabbalah while using the NWO kook phrase?

What’s with all the photos?

Bill Gates claims he’s not Jewish, and I believe him, because real Jewish people obey their G-d’s laws in the Torah (first five books of the Old Testament Bible)

NWO admires the supposed true story of the daughter of a Pharaoh that was a witch, and corrupted Israel’s King Solomon with her reincarnation BS. Same reincarnation BS taught to Kabbalah converts like Madonna. 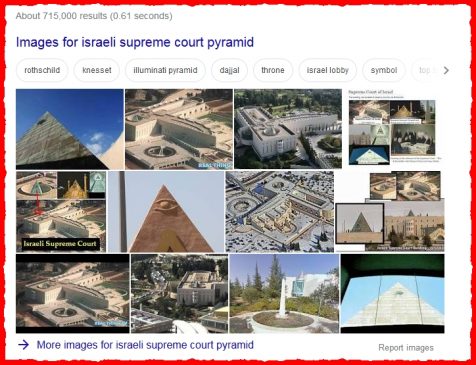 NWO love that old world order BS so much, they (Rothschilds financed) poked a fricking pyramid through the roof of the Israeli Supreme Court … with an Egyptian ALL SEEING EYE of on it.

‘The Hooters’ sang about Moses being told to take his tribe out of Egypt!

It’s founder, Adam Weishaupt just happened to be one of those so called ‘chosen people’.

I remember Sunday school lessons, their (we all came off the same ark of 8 people apparently) G-d told Moses to take the Israelites OUT of Egypt. Yet here we have today .. drum roll … Egypt IN Israel .. and no one is protesting it!

Same G-d of the Jews (no letter J in Hebrew) told mankind not to sleep with the same sex (Leviticus 18:22) yet Tel Aviv (in Israel) is regarded as the “gay Mecca of the world”.

So anyway, less is more.

Who wants to send a birthday card to the Georgia Guildstones and it’s mysterious “R.C. Christian” creator?