While slowly taking over whole suburbs like Box Hill, ‘they’ are taking over in Australian restaurants too.

Some chief wankers with the help of the Daily Mail, have declared…

For years, the humble meat pie, the Chiko roll and hamburger with beetroot have vied for the coveted title of Australia’s national dish. But now, meals like grilled barramundi, laksa soup and spaghetti alle vongole are overtaking these Australian classics in popularity, according to esteemed chefs. The Australian palate has become more accustomed to exotic flavours, especially from Asian cuisines, thanks to an increasingly multicultural society. DM

Chefs, plural, more than one.

I better put my ‘They Live’ (classic sci-fi movie 8/10) sunglasses on. 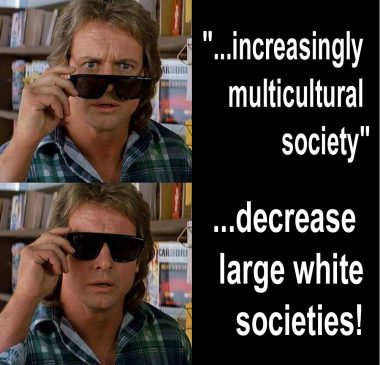 I get it, I’m now ‘menu replacement’ paranoid too, but with sane reasoning…

It’s a touchy topic I’m not going into here so as to not lose my 1 cent per day ad-revenue.

Plenty of Kalergi ‘debunkers’ (apologists) out there … but regardless…

And staving from a lack of Aussie protein and tomato sauce in your beds many years from now, would you be willing to trade all the days from this day to that for one chance, just one chance to come back here and tell our enemies, that they may take our baby milk powder overseas, but they’ll never take our MEAT PIES!!! RMS 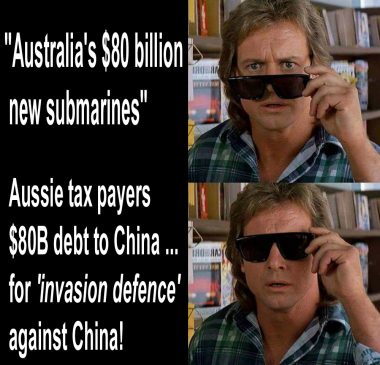 Australia’s future submarines program has hit a nine-month delay, an audit of the $80billion program has found. Two key contract milestones have been extended. ‘As a result, Defence cannot demonstrate that its expenditure of $396million on design of the future submarine has been fully effective,’ the Australian National Audit Office said on Tuesday. DM

You know the feeling of paying something off, like a home or land loan … and then having a party letting everyone know about it afterwards?

I’ve yet to see a celebration of our $500B credit card with COMMUNIST China … being paid off.

The only country that would invade us with weapons … has already mostly done so with passports.

They flew their foreign flag on Australian soil at the Box Hill police station in 2019, and have one of their own working close to the PM … even though ASIO warned us all about her.

Would you ignore your mechanic when he tells you your wheel is about to fall off?

And that other country (Indonesia) should they invade after vowing to “out gun Australia” … only have that possibility thanks to you!

We borrow off China with interest – then our so called government (lib labor same #uckwits) hands $1.2 billion 2008-19 (source DFAT) FREE money to a country that massacred East Timorese and PNG peoples. 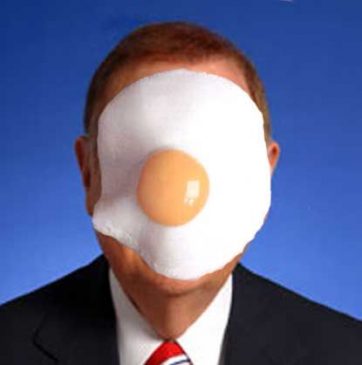 This should be English Australia’s new 2020 national favourite food!

4 Thoughts to “$80B ocean coffins and Asian food overtaking Australia”