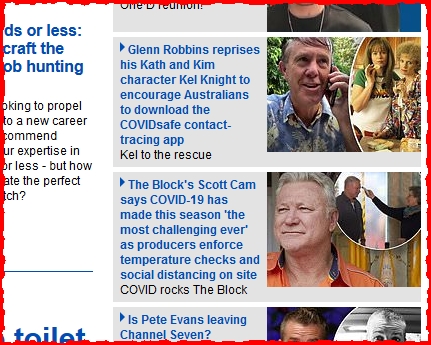 Still trying to figure out if $347,000 of your (I don’t make the threshold each year on purpose) taxes for Scott Cam’s four (4) social media posts and three (3) videos were good value for money or not? ABC-News

Any Australian that loved his country would have done the same for FREE! No, not that Scott Cam.

While talks of letting commies back in are supposedly under-way, today one of my few favourite TV stars is now flogging the so called government COVIDSpy app.

Why Glenn Robbins, why?

While pretending to be his old ‘Kath and Kim’ character Kel Knight, Robbins is now pushing the gentile tracking app. Same app that’s going to cost millions more from false alarms and job loss. The TikTok video platform pays for video views, but I wonder if ScoMo is kicking in a grand or two, too.

Scenario: 100 school bag lockers with 100 phones stored in the same 10m area for OVER 15 minutes. 99 students (and their parents) later that afternoon get a message to ‘stay at home for 14 days’ because the owner of phone 100 tested positive. Phone owner 100 only interacted with 19 students. So 80 working families suffer over false app alarms. You’re back at work 14 days after the school false alarm. You work on the first floor, and 3 meters directly above you (Bluetooth 10 meter range goes through objects) someone you’ve never met is sick, and their app records your phone being near them. ScoMo’s people send you a message (without details of who’s phone tagged you, or where) ORDERING you stay home for another 14 days. Your phone sends the same tags to your 10 office colleges app’s. You’re going insane but still healthy, but with all the time off, your business shuts and you and your staff end up on JobKeeper. Rolling false alarms costing the economy millions more debt hurt, coming soon.

Service type: Prepaid Service Name: Problem: I keep getting unsolicited spam from “gov.au” trying to force me to install some software I don’t want or need under law. Please block that unsolicited spam and tell them that your paying customers aren’t babies. Thank you.

related: That app doesn’t work on all phones

related: APP Health Minister Greg Hunt grew up being chased by his mother with knives

According to former AIDS scientist Judy Mikovits PhD (Youtube), those that take the flu jab are INCREASING the risk of catching COVID-19

Interesting video, you should watch it from the start. Roll your sleeves up, Romper Room Bushy! (comment lurker that wears socks with women’s sandals)

6+ months from now prediction: When Billy Gates and his MIT daemon (literally means demon) coding mates release their QUANTUM DOT TATTOOS, all the bunnies that installed the COVIDSafe app will be first in-line.

OUT OF THE SHADOWS

Speaking of daemons and the entertainment industry. Yesterday I came across a new doco with 10+ million hits in 4 days.

It has two high level Hollywood stuntmen (the actual guys that made fuckwits like Tom Cruise look cool) and a former CIA agent going on record about Disney and the CIA’s long term propaganda over the global audience.

I did a Disney blog 14 months back covering pretty much the same global witchcraft cabal going on, that these men allude to in this (soon to be banned) Youtube video.

3 Thoughts to “Wheelbarrow out the next Govt propaganda shill: From Scott Cam to Glenn Robbins”