Tonight while searching “rodney stevens” on Google … to see where rodneystevens.com is on the rank list, I came across the above video from a guy also called, Rodney Stevens. (no relation as I have an Anglo tan)

Unlike Matthew, Muhammad, Kamahl and Cheng … Rodney isn’t a common Australian name ; nor are there many famous Rodney’s world wide.  Rodney Rude and Rodney Dangerfield, two coarse comedians .. and that’s about it.

Out of curiosity, I watched the above stranger with same name … I have no idea what he’s waffling on about. Maybe trying to describe Buddhism, or something or another … real careful like, not to utter words ‘spirit’, ‘heaven’ and so on. During the 8 minute waffle, he repeated … “be aware”, “awareness”.

20 years ago while depressed and texta scribbling on paper, I wrote “Be Aware” .. and hung the paper on my bedroom wall …. where it still hangs today. 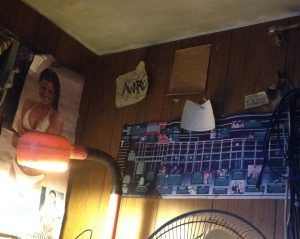 Be aware, of what?

So, an eight minute waffle about nothing really important (I often waffle on as well) by a guy with the same name, and using the same ‘be aware’ phrase had me thinking .. maybe folks with the same names are similar in some ways?

Some other unknown Rodney made a t-shirt… (non-commission link)

Why bother? It must be a Rodney thing.