FREEDOM ‘SACRIFICES’?
INGSOC Oceania leader Morrison is ‘supposedly’ kicking around the idea that all Australians will have to install a phone ‘tracking app’ to keep us ‘safe’.

The software application from Singapore, only has 20% of their population using it.

So if this app is forced onto us all, what’s to stop people just leaving their phones at home – or simply not owning one? A “failed to carry phone” fines?

Luddites and Amish don’t own phones, then what? Compulsory PLD ownerships?

That won’t work either. Billy Gates wet dream QUANTUM DOT TATTOOS will be rolled out. You can’t forget or leave your under skin ID tattoo at home.

We seem to have all this BS under control in Australia now. Trouble is other countries don’t, and won’t for a long time. It could all kick off again once the boats and planes (those that haven’t gone broke) start coming in again. 4 people from ‘unlocked’ Wuhan have got it again, and 40+ more in South Korea, Israel etc. Getting it once doesn’t mean you’re immune for life.

Wow, the 5lt bottle of isopropyl alcohol we got online 2 months ago really is ‘alcohol’. Due to the rip off price increase of the isopropyl, I had to finish the job off with some stale ULP. Those pirate CD’s left in my poor letterbox take some burning.

FUEL BELOW $1 DOLLAR
No waiting at Freedom Ashmore today. Been a few weeks coming for the others to follow the Nerang independent that’s been below a dollar for a month. All fuel stations on the GC are under 1 dollar now.
$30 filled the Bubble and my 5lt mower fuel can today.

First time I’ve had a full Bubble in years. All that cheaper fuel in my tank, to drive around locally. Geez, it’ll go stale before I do 400km going to bottle shop and back.

Bloody ‘Daily Mail’ like to make all Australians feel guilty for a few dick-heads giving the Chicoms in Australia a hard time.

Turns out McDonald’s in China have banned black Africans. That’s human nature for ya, but dip-shit sites like the DM go on and on as if nature will change one day, if they keep hammering on long enough.

Ass wipes are also calling Wagga Wagga “racist” because they no longer want to be a sister city with some grubby province in China any-more due to them still keeping wet-markets open. (the BS came from the bio-lab, but anyway)

Speaking of junk food joints, I cant believe the old P.O.S $2.79 billionaire that owns ‘Hungry Jacks’... 1. doesn’t own the land his stores are on. 2. Isn’t going to pay rent for 3 months while the drive-trus are still open and making him money. What an old P.O.S.

Our so called INGSOC Oceania government can’t even keep our soldiers in-line as they all party on together.

We’ll be told the GST ‘must go up’ to cover the trillion dollar debt (Barbary Joyce prediction) incurred during Covid-19, before they dare pick up the phone and ask USA (Obama funded the Wuhan lab with $3.7 million ten years ago to study bats) and China for repatriations.

They fuck up, and we go into debt slavery. No other work place in Australia operates like that; but our INGSOC Oceania branch does / will. 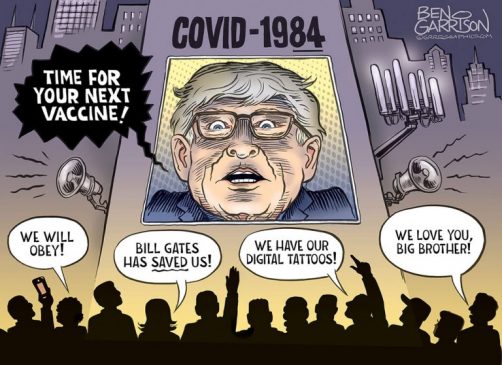