Saturday 17th November, a baby pram was found by the water at Tweed Heads.

Police divers did their thing looking for a body. It was a big deal in the news … 8 days ago.

Fast forward a bit; the Police arrested the mother and father at Broadbeach. (23km’s away)

The University educated mother is let go, even though see walked from Tweed Heads where the murder happened, to Broadbeach … yet never went for help. Red flag!

The father is charged, yet his identity is still hidden from the public.

It’s obvious the father is Original (aka Aboriginal). The mother part white.

Why ‘part white’? Because the baby girl supposedly wasn’t ‘dark enough’ (too Caucasian) to please her 47 year old dark skinned father. Supposedly she was possessed. (because she was too white)

Racism against one’s own family member, yet the mother and father’s identities are protected?

Before the murder, the mother asked a female friend to take the girl, but she couldn’t as she was also homeless. Gee, well then go to Centerlink or DOCS for help and have the baby adopted. 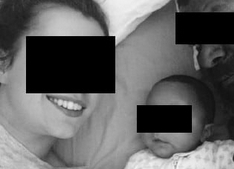 Yet the cops let her go? WTF?

Imagine if the father was white and the mother half black … and the baby very tanned. Full identification would have been all over the media within an hour.

It’s been 6 days since the last media update. (based on the Google News search results)

This story won’t resurface. But if it ever does, the murder’s name will never be released, which makes it hard keeping track of events to come. (future jail release dates etc)

Media blurred his face, but at thumb nail size you can see whom hates white people so much … hates whites so much that he even killed his own part-white daughter.

The murderer has been charged, yet his ID is still secret! Why?

Is the system worried Whitties will revolt? BS!

26/11/18 update: The well educated mother was supposedly “sung”. (brain washed via some voodoo shit to stay with that ass hole…yeah right)

14/12/18 update: “Mother of baby found washed up on beach charged by NSW Police”