The world is being lied to by an Australian government backed-supported American TV program.

Not all tax paying Australian’s can afford pay TV, nor do they all watch ‘Aussie Gold Hunters’

“But they are helping promote Australia!”

OK, might be worth some of our taxes to promote Australia. Let’s take a look at what’s being promoted.

At night, because it’s ‘cooler’, the mates are supposedly ‘kilometres away’ on foot from base camp looking for gold. 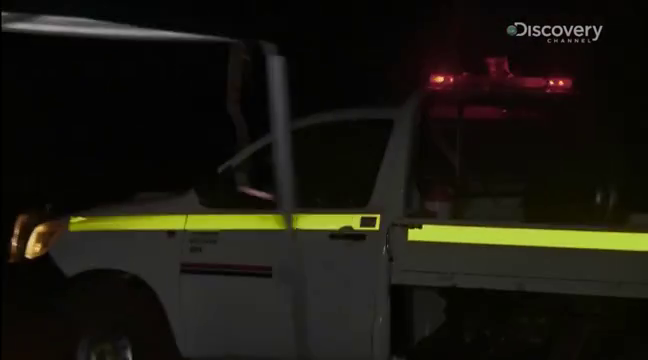 They head back after ‘four hours’ to find someone in a white ute raiding their camp site.

Turbo calls out to Rob to chase after the robber’s ute, on their quad bike.

Luckily the “Factual” film crew had their cameras and light set-up on the quad front right fender to film Rob’s concerned face! 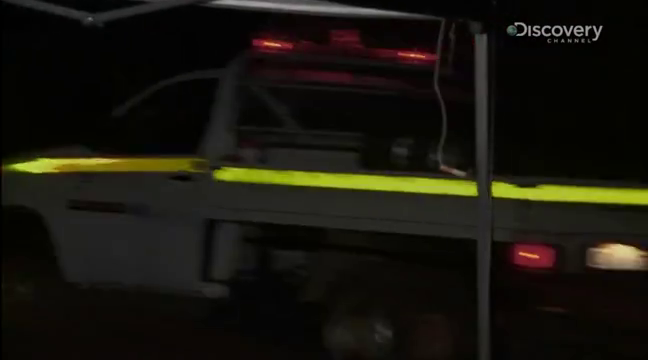 Video screen caps are from a poor quality download – but the original footage caught by the film crew would have clearly shown the rear number plate.

Rather than zoom in to the number plate, the very next frame after this one, they cut the clip and zoom out showing the ute 30+ meters away heading down the dark dirt track.

While Rob was off acting, errr, on the chase, Turbo checks to see what was stolen.

Apparently the quad dirt bike (oddly not earlier used to ride to the detecting site km’s away) couldn’t keep up with a commercial work ute on a bush track.

It was probably distracting (and dangerous) having the film crew’s bright fender light shining in Rob’s face during the unconvincing pursuit scenes.

Rob comes back defeated and half ‘blinded by the light’ to find the ‘factual’ updates.

AT NO TIME DURING THE SHOW OR IN THE OUTRO TITLES DOES DISCOVERY SAY THIS WAS A RE-ENACTMENT.

AT NO TIME DO THEY CALL THE POLICE, TALK ABOUT DOING SO, OR GIVE UPDATES ABOUT THE “POACHER”

No fun, but plenty of poor acting. Dummy actor Rob shows us his good luck charm brought from home.

Daddy how much did Discovery pay you to lie to Australia?

No one lies to their daughters for free.

First time in Aussie Gold Hunters history! The mates have a stand-behind petrol Dingo digger, dry gold blower, high grade metal detectors and other gear worth $20,000+, yet they couldn’t afford a $10 digital kitchen scale from K-Mart?

It’s hard to see due to scrub and low branches, but above the white rock on the track, about 20 meters out deeper into the bush, there is a bonfire (approx 2 meters wide) earlier used to light their night search area.

We’re supposed to believe they walked back off to base camp without putting out the bonfire?

Husband and wife team, Chris and Greg Clark, are so dull the crew pulled the old “I’m lost” trick to get tensions up. Same stuff happened last year.

Chris Clark looks up, supposedly lost, and points around talking to the camera crew.

She states ‘having your head down scanning’ makes you ‘forget where you are’.

True, but rather than just ask the camera crew where she is, or just follow their foot tracks back, she gets on her 1-5 watt UFH CB (2-5km range out in the open) walkie talkie to call up husband, Greg.

I’ve been a CB’er for 37 years and have a good idea about CB radio use. 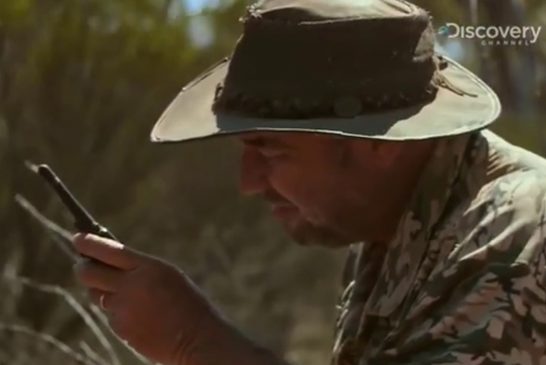 As he scoots down, lowering the aerial range, then blames the radio’s failure on flat batteries.

Speaker on each shoulder means they went to all the trouble getting expensive stereo speaker metal detecting gear – yet no hand-held GPS loggers?

It saves on going over the same ground, over and over again.

Guess what else they can do?

They tell you where you are, and if a base camp plot was recorded, it would show you how to get back.

At the very least, either she or the film crew had GPS on their mobile phones showing where they were. 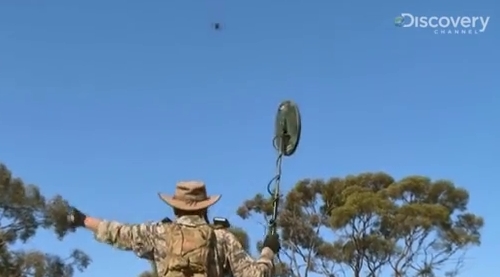 So does concerned Greg run back to base camp to get new walkie talkie batteries?

No, the part-time actor sends up ‘the drone’ for his lost sheep to follow back home.

At the start of the episode, they drove into the ‘sight unseen online bought site’ with nothing but just their white ute. Caravan and front end loader must be inflatable?

Factual television, this is not!

I’ve watched this show since day one, and there is real gold mining going on, but when there’s no indication about what’s not “factual”, yet layered with the tax payers money, all the ‘facts’ need to come out too.

Would the same government give grants for openly fake TV shows promoting Australia? Of course!

The issue is Discovery and Electric Pictures (WA), in their outros make the “Factual” claim, which is 100% BULLSHIT! Wikipedia have it listed as “factual television” too.

I’ve yet to find out how much, if any, the VIC and WA governments are giving that $20B US parent company (and it’s bottom feeders) to make content for PAID TV. Anything with government funding should also be on free-to-air too!

-Clips used under Sections 106 and 106A, for purposes of criticism, comment, news reporting, teaching, research.