Chris Chapell (guy in the video) often got out from behind the keyboard and travelled to Honk Kong with his HK associate ‘Shelly’ to cover the HK riots. 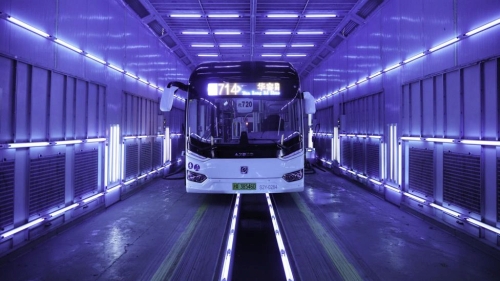 Why aren’t we using UVC light to destroy Covid-19? China does. BBC story on it here

Mothers, instead of boiling water, trust UVC to clean products that end up in their babies mouths, yet supermarkets aren’t setting up the same to clean money etc. It’s just a 240v plug in the wall.

Nah, the agenda is a global ‘cashless’ new world order, and Bill Gates ‘medical’ vaxx-tattoos in everyone to prove we’re clean.

As a last resort, much needed face masks etc could be cleaned in them too.

China are importing robots with UVC lamps that clean hospital rooms in 10 minutes.

Where’s the govt funded factories two months ago now set up and making things like these UVC lights and N95 masks, hospital respirators?

Don’t they have think tank advisers that bring all the best ideas forward? What the hell are we paying them for?

Are we that fricking unskilled in 2020 that we can’t wire UVC fluro light tubes together? 20 years ago I worked at the old ‘Davis Lighting’ factory in Molendinar. It’s piss easy. Now days we have 3D printers to make fitting, mounting housings, covers and such too.

Hell, get cheap 3 ply from Bunnings and trolley wheels to make base frames. The things don’t have to look pretty while holding the tubes in place. Manually push the units into a room with extension lead outside, close the doors and leave on for 10 minutes.

We’ve got a fuckwit in charge of the country that’ll pissed off to Hawaii while the country is burning, and today refused to take a pay cut. $2.1M a year Qantas CEO is working for free until this is all over.

Economist Steve Keen said the ratings agencies should simply be ignored as governments can easily print money to pay off their debt. ‘Governments can create any amount of their own currency they desire by running a deficit and have it financed by the Central Bank,’ Professor Keen said. The UK Treasury was borrowing directly from their central bank, the Bank of England, for their coronavirus rescue package – making it all just accounting, he said. ‘The Treasury is the formal owner of the Bank of England and receives all its net interest income. So the cost of doing this is effectively zero,‘ he said on Monday. The only problem comes with spending the money as it can cause inflation or a trade deficit, but Professor Keen said those were the ‘very last’ problems that exist right now. Daily Mail 31/03/20

Instead of doing what the UK is doing (creating their own money) that SloMo clown is putting us deeper into debt with that same communist country that cause this bullshit!

2017 when he was the treasure, he raised the “debt ceiling” with China from $300 billion, to $500 billion. What’s the Chinese pawn broker going to want if we can’t pay him back?

They already own Box Hill, Victoria and “more than 50%” in Brisbane suburbs, with whoops, they call them “provinces” (new sign says that in front of the old Sundall site, Southport) now like … Robertson, Stretton, Macgregor, Sunnybank, Calamvale, Runcorn and Sunnybank Hills