VICTORIAN Aussie Daniel Shep and his girl friend were recently hospitalised with heart conditions after taking the Pfizer gmo-jabs due to the … “no jab, no job” fear of losing their jobs and failing to pay the mortgage. Mr Shep got pericarditis and his girlfriend got myocarditis. Their GMO-stabs were two days apart. 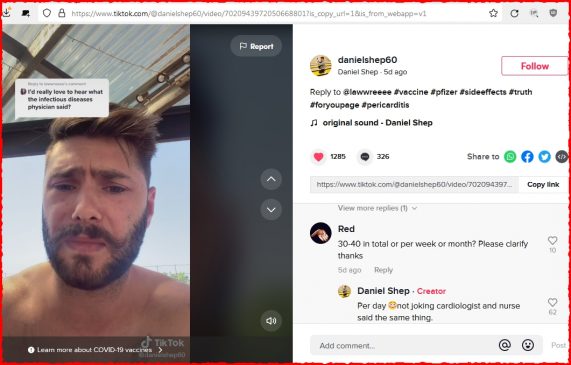 Mr Shep’s cardiologist, and separately a nurse too, told him they’re seeing “30 to 40” cardiac patients PER DAY. 20 to 40 years olds, and mostly males.

(his video showing the name of the hospital was banned by the Chinese owned video platform, Tik-Tok)

In their Tik-tok videos, Mr Shep shows the couples hospital paper work as proof to the pro-stab doubters.

His first video was in a hospital bed. 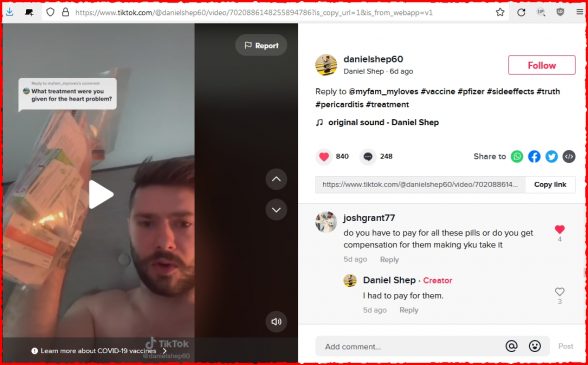 In another clip he holds up a bag of drugs the FAUX-GOVT made him pay for.

That f-wit Victorian Premier Dan Andrews scares people into getting gmo-stabbed, and when they get sick, he makes the sick pay for the drugs. How insane!

I presume his girl friend is having to pay for her own medication too.

He also mentions that his private hospital is getting patients sent over from public hospitals due to overflow. Overflow of legit China-flu patients, or victims of the gmo-stab adverse reactions?