Many have been joining the dole cue due to joblessness thanks to the Xi Jinping virus.

Family members have been trying to get me on the cue too, but I’ve been putting it off because. 1. I haven’t all the up to-date paper work usually needed to join Club-Dole. 2. I know Morrison is borrowing, at interest, all this money from the same farking country that released this BS, and I want no part in helping putting us into debt with those red pricks.

Those fake CIA scrotums might find other uses soon.

Ow, he finally closed schools with more than 2 people? Nope.

And when all clears in 6, 12, 18 months, or whatever, what’s to stop it happening again? Apparently bats caused all of this, yet they still get to gather in large numbers and party. Chinese markets are still selling them. They scratch people and poop everywhere. ACA did a story on the “tornado of bats” in Ingham, Far North Queensland just 2 months ago. Take away their freedom too, IF that ‘official’ story is true Mr Morrison!!!!!! If not, then hang Comrade Xi Jinping and his Wuhan bio-lab out to dry on the clothesline-of-truth. Whom do you serve Mr Morrison, comrade Xi, or the Australian people? Turnip King

Anyways, all this ‘stage 3’ crap may slow my trickle of lawn mower customers down to a dribble, and or ban them from travelling for “non-essential services”. That’ll force me onto Jinping’s credit card too.

Gee, been up since 4am after locking the barking dog inside .. got bored and went to the dole site for a read. 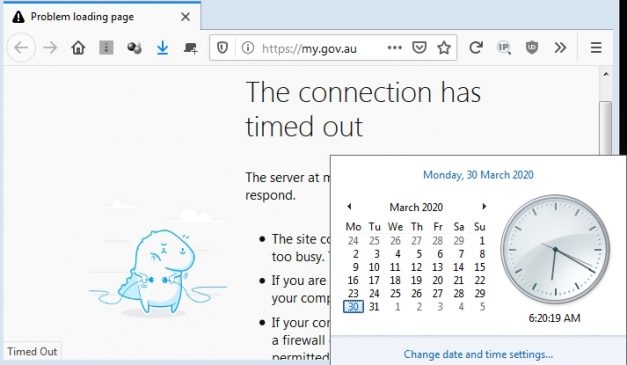 Although the Bubble needs some juice after frantically driving around all over the place at 4.30pm Saturday trying to find a polling station, to vote out Tom Tate. (Demon Dale Dickson gets to rule another term regardless)

Read somewhere last week that fuel is supposedly dropping to $1 this week.

$1 for fuel, and $4 worth of baby potatoes should see me through for another fortnight.

Fark, but what ‘stage’ will we be at in a fortnight?