Without fail, some uneducated dumb ass is always in the daily news sputtering on about supposed “races” in humans. 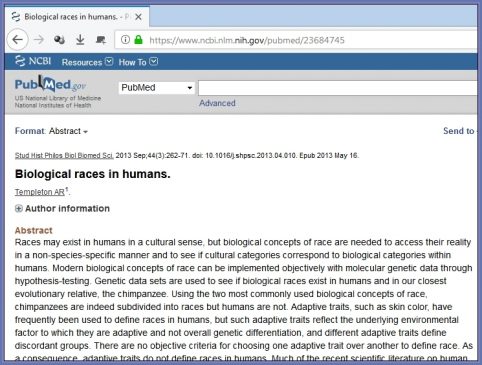 If you can’t comprehend round about language, it explains there are NO biological races in humans.

Huh? There are no “races” in humans!

What? No races, thus no such thing as “racism”.

The closest to humans was the Neanderthals. Last time I checked they don’t exist any more … well the Bush family … but anyway.

Human skin colour comes about due to long term exposure to UV (ultra violate light) … e.g families (aka tribes) that live for thousands of years near something called the equator … where UV … from the SUN … is high.

Dark skin doesn’t happen over night. It takes thousands of years, but it happens. The darkening material in the skin is called ‘pigment’. All basic school stuff .. are you keeping up Jackie?

What is pigment’s purpose?

To create “races” so dumb asses can spew “racist” slurs?

No, to create natural sunscreen for those in high UV areas.

Again, it’s doesn’t happen over night, but it does happen.

These stupid, supposedly educated politicians living off our taxes and ruling our lives, literally stand-up each day to the Judeo-Christian cloud fairy…. Lord’s Prayer.

How does eight (8) people of the same kind in only 4,000 years evolve into all of the supposed “races” dumb asses like Jackie Trad assume exist today?

It can’t! Evolution isn’t that fast – if it even exists – ask a shark or octopus. The above US GOV page explains dark skin is about exposure to UV, not because of “race”.

Those like Jackie Trad want other dumb asses to believe we all came from eight (8) of the same kind (Jew’s Torah says no different) while screaming “racism” BS to look good in the news rag.

Do these idiots believe in their own tall stories or not?

Why are people, supposedly descendants from the same eight (8) boaties … being fined or sent to jail for “racism” … when there are no races in humans?

If you believe the Jew’s flood story Jackie, then we’re all (including Saddam Hussein and his side kick) from the same kind.

If you poopoo the Jews tall flood stories, then you’re an “anti-Semite” … yet another misnomer, as Ashkenazi Jews are not Semitic, when many Arabs are.